Fainting and Falling Are Serious Business 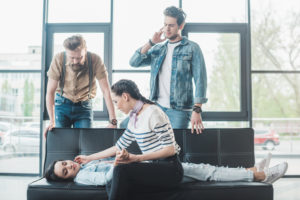 Winters in New Jersey can be a time where we all slip and fall on a patch of icy sidewalk. That’s a good way to smash an elbow on the ice or bonk the back of your noggin.

Fainting that leads to falls is a whole different thing, and a far more serious one. That’s why we offer the region’s only dedicated multi-specialty center for people suffering from fainting and falls — the Faint and Fall Center at Hunterdon Cardiovascular Associates.

Most people don’t think about fainting, but it’s not all that unusual, especially in older people. Fainting occurs when the blood pressure gets too low. This is known as hypotension, and the heart isn’t pumping an adequate supply of oxygen to the brain, hence the person faints. Arrhythmias, abnormal heart rhythms, are often behind a person’s fainting episode.

Here are some numbers:

Everyone simply assumes older people fall because they shuffled their feet and caught on a rug, step, or other impediment. Often those falls are actually due to fainting. Fainting is a brief loss of consciousness, colloquially known as “blacking out” or “passing out.” In many cases, the patient doesn’t have any recollection of fainting prior to the fall, so checking for possible hypotension isn’t pursued.

That’s why a dedicated clinic such as our Faint and Fall Center can be so important for some patients.

Specialization can pinpoint your fainting

Fainting that leads to falls can have many causes. It can be due to cardiac conditions, a neurological cause, a metabolic disorder, or stress. That’s why diagnosing these occurrences accurately can be difficult for your regular physician. This can lead to a parade to a variety of different doctors without success.

That’s not the case with our Faint and Fall Center. We are a one-stop resource for patients who want to pinpoint the cause of a faint and fall. We bring together a multidisciplinary team of healthcare professionals who know what to look for and what to do about it.

If you or a family member has had a falling episode that didn’t seem like a simple stumble, it could have involved fainting. Please call the team at the Hunterdon Faint and Fall Center at (908) 788-1710 and let’s check it out.

Posted in: Faint and Fall Center

Send us a Message