Home | Blog | Cardiac Ablation to Get Your Rhythm Back

Cardiac Ablation to Get Your Rhythm Back 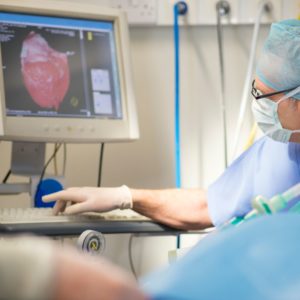 When most people think about their heart, they have difficulty understanding how destroying some of the tissue in the heart can actually be helpful. This is a natural reaction when we tell a patient that cardiac ablation may be necessary to correct their abnormal heart rhythm. We perform different types of ablation in our Electrophysiology Clinic in Hunterdon Cardiovascular Associates.

What is cardiac ablation?

The goal of cardiac ablation is to destroy the pathway of the abnormal rhythm. This is usually done with a catheter with electrodes at the tip. Cardiac ablation will stop the source of the electrical signals that are creating the abnormal rhythms. It can also disconnect the electrical pathway between the upper chambers (atria) and the lower chambers (ventricles) of the heart.

Who is a candidate for cardiac ablation?

We use cardiac ablation to correct problems with a patient’s heart rhythms. For normal function, our hearts must beat in regular rhythm. These contractions are initiated by electrical impulses that must follow a precise path, otherwise the patient can have arrhythmia, an abnormal heart beat.

Cardiac ablation usually isn’t the first treatment option, but it may be the right approach for patients with these characteristics:

There are different methods with our cardiac ablations in the Electrophysiology Clinic:

If you have symptoms of an irregular heartbeat, we need to see you at Hunterdon Cardiovascular Associates. Call us at (908) 788-1710 to schedule your consultation.

Send us a Message